Above: A selection of sugar cane railway images from Cuba, Egypt, Fiji, Java, Hawaii, and Queensland. These and other images can be found in the Image Collection.

Please Note: This page has not been properly updated for several years, especially as regards the ownership and closure of Queensland sugar mills.

Sugar comes from a variety of sources, including a tropical grass (sugar cane), sugar beets, corn (maize) and a variety of palm trees. Sugar cane is grown in tropical and semi-tropical countries around the world, and railways often provided the most economical means of getting the sugar cane to the mill and the resulting sugar to port or market.

Queensland's mill-owned sugar cane railways (aka tramways) provided the main impetus for the CaneSIG website, however an attempt is being made to include materials from other sugar growing areas as well. Please contact the CaneSIG coordinator if you have information that can be shared with other modellers, railfans and historians.

The Australian sugar industry as we know it today began in the 1800s with small plantations and local sugar and juice mills. As the industry expanded rivers and creeks were often used for transporting the cut cane, otherwise bullock or horse-drawn carts moved the cane to the mill.

The Australian industry gained impetus with the blockades of the American civil war but by 1855 prices had dropped again and many mills were operating at a loss. This pattern of boom and bust has continued worldwide throughout the succeeding decades to the present.

Cane tramways came with the expansion of growing areas and mill consolidations around the turn of the twientieth century. Portable track systems and lightweight rolling stock allowed temporary narrow gauge lines to be extended into the fields where wholestick cane was loaded by hand and the trucks pushed/pulled out to the permanent way. Surplus World War I trench railways equipment facilitated the expansion of Australian and other SE Asian tramways. Cuban and American systems, on the other hand, often used the larger equipment and operating practices of their mainline cousins.

The change from plantation to family-owned farms, along with the labour shortages of the twentieth century wars, encouraged innovation in both harvesting and transport technologies. By the 1970s both wholestick cane and steam power had been replaced in Australia by cane billets transported in bins and pulled by diesel power, although steam power did continue in some other countries

The sugar milling process also improved, from low-efficiency crushing and batch boiling to today's highly efficient semi-automated mills producing thousands of tons of raw sugar a day. However, transport of the cane to the mill remains one of the largest milling costs.

Many mills operate rail transport systems to minimise these costs. In Australia tracks are typically laid on easements beside Shire roads or along farmer's fields with the rail system, locomotives and rolling stock mill owned and operated.

Since cut cane deteriorates fairly rapidly, the tramway system also performs an important short-term storage role. Empty wagons are delivered to the farm pick-up points just-in-time for use with full loads delivered to the mill as rapidly as possible, maintaining a constant flow of raw cane. The cutting season extends over several months (typically June to November in Australia) to optimise sugar production and minimise the infrastructure investment required.

Raw sugar must still be refined before delivery to the final customer, typically at an overseas or capital city refinery. Rail systems often carried the raw sugar to the nearby port or refinery and some also transported molasses and other by-products... although increasingly road transport is being used.

Sugar growers are very dependent on the world price for sugar, which fluctuates up and down as politics and the weather dictate. It seems reasonable to suggest that rising costs, low prices and urban development will hasten the end of the sugar industry in Australia, just as similar factors have effectively ended sugar production in a number of other countries.

Jump to Australian Overview or Other Countries 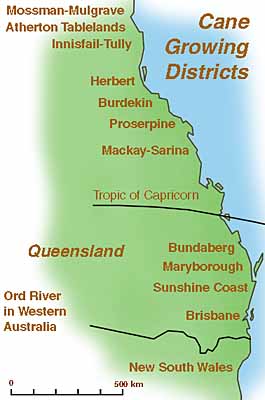 Some information on Australian mills, especially mill closures and ownership changes, has not been updated for some time.

Over the years there have likely been several hundred mills in Queensland alone if one counts both 'juice' and regular mills. Some lasted a few months, others are still going strong after more than a century of service to their communities. As well, there are bulk sugar terminals at Cairns, Mourilyan, Lucinda, Townsville, Mackay, Bundaberg and Brisbane to transport bulk sugar to refineries in the capital cities and overseas.

Route kilometres are a bit harder to provide, however, in 2004 the Sugar Research Institute indicated "Queensland sugar mill owners own, operate and maintain 4100 km of narrow gauge (610 mm) railway...". [*] This figure does not take into account recent mill closures and the removal of their tracks or new track being built for mill interconnection. A small amount of cane is also carried on Queensland Rail tracks.

The Queensland, NSW, and WA mills below, some of which are no longer in existence, illustrate the geographic, political, historical and social factors affecting the sugar industry. Most of the operational mills still have some form of railway delivering cut cane to the mill, and/or within the mill, and/or transporting sugar and other milling products. Practically speaking, road transport has taken (or is taking) over many of these functions.

Additional details on individual mills may be available in pdf format from the Modelling Resources page and or the Sugar in the News page. Photos can be accessed via the Image Collection using the mill name (eg Moreton). [All links in the left hand column above].