While parochially we would all describe the railways near our home as 'normal', the worldwide railway industry designates 4' 8 1/2" (1435mm) as 'standard' gauge. Railways with gauges wider than this are known as 'broad' gauge, while railways with smaller gauges are 'narrow gauge'.

The decision to choose one gauge over another was typically based on engineering and political factors... in other words, the relative cost of engineering works, the biases of the engineers involved, and [frequently] denying access to national/mercantile competitors.

Resource railways, particularly in lightly populated or physically demanding areas are often built as narrow gauge to save costs (3' 6" in Australia's hinterlands, 3' gauge in North American Rocky Mountains). Industrial, mining, and plantation railways will often have even narrower gauges (eg 2' cane railways in Australia and Fiji) to save costs and improve accessibility (eg tight corners).

Narrow Gauge Examples: Examples of narrow gauge railways from around the world.

The Best Gauge: Why did an individual railway or tramway chose a particular gauge. 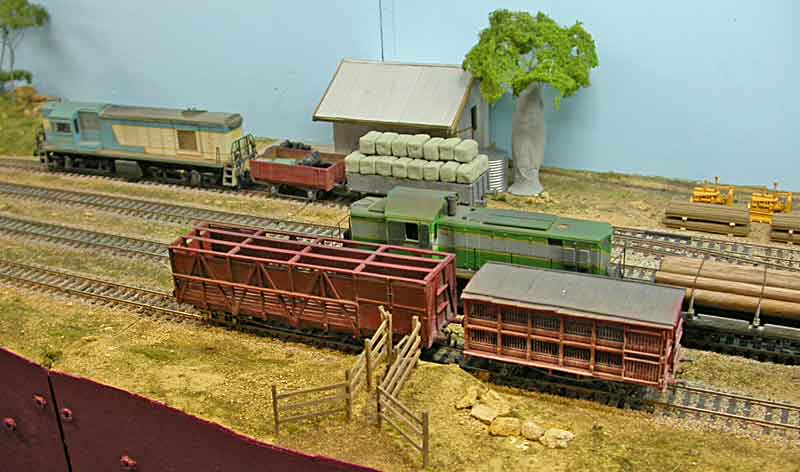 Narrow gauge railway modelling appears to be one of the fastest growing segments of the model railway market, particularly since the introduction of Bachmann's On30 models and various larger scale models.

Laurie Green MMR, one of Australia's more prominent modellers of North American narrow gauge, suggests that there are several reasons why modellers are so attracted to modelling narrow gauge railways**.

While this certainly describes most North American and European narrow gauge systems, it doesn't explain the attraction of the Queensland railways (both mainline and sugar cane) and similar systems which have fairly large rail networks and unit trains containing hundreds of almost identical wagons.

American modeller Al Armitage explained his reasons for modelling narrow gauge in Anyone for Narrow Gauge?, Model Railroader March 1968: I'm a model builder, a born free-lancer. I get as much pleasure from conceiving and designing models as I do in building them. Since I build nearly everything from scratch, I enjoy a freedom of choice in subject matter which has few limits in any direction.

I chose the concept of a logging company with rights over the common-carrier line because it provides me an opportunity for modelling not only the highly individualistic equipment and structures of a specialized industry but also the much more varied aspects of a typical, localized, short line.

My own explanation is that narrow gauge modellers are attracted the unique nature of each narrow gauge railway. We like what some commentators describe as their funky or idiosyncratic nature. In Queensland, for example, even mill tramways owned by the same company can be quite different as equipment is modified through maintenance or accidents.

However, this attraction isn't unique to narrow gauge railways, and narrow gauge modellers should also consult materials on short and branch line railways, whatever their gauge. For example, while Beebe and Clegg's Narrow Gauge in the Rockies was an early inspiration for me personally, I was even earlier influenced by their Mixed Train Daily, and also likewise found Whitehouse's Branch Line Album more fascinating than mainline accounts.