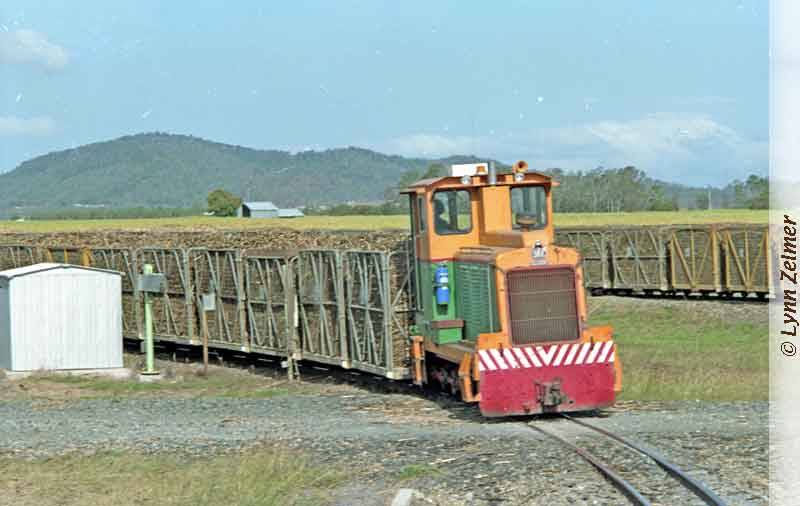 Railway operations in Europe during WWI will perhaps be the most familiar narrow gauge examples for many Australians. These were primarily 2' gauge using American and British railway equipment. While some were built with temporary track sections similar to those used on plantation railways, other had quite permanent formations, albeit often hastily constructed [YouTube video]. A number of WWI locomotives made their way to Australian sugar mills, construction and industrial sites following the war.

The examples here are a sample of the ones I've had direct contact with, either through visiting (generally as heritage/tourist operations) or research interest, or ones that friends have had contact with. Like many NG modellers I'm interested in the small and quirky so you'll have to look elsewhere for mainline NG examples.

The Puffing Billy Railway, "Australia's premier preserved steam railway", operates over one of those narrow gauge lines (Belgrave to Gembrook) and is a major Melbourne-area tourist attraction. 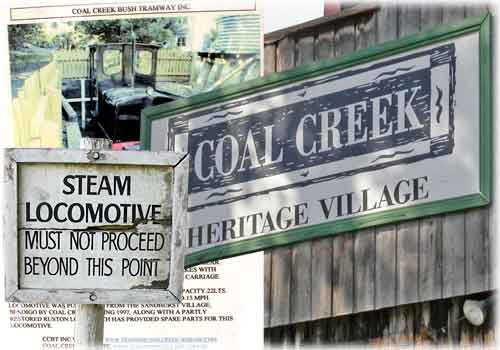 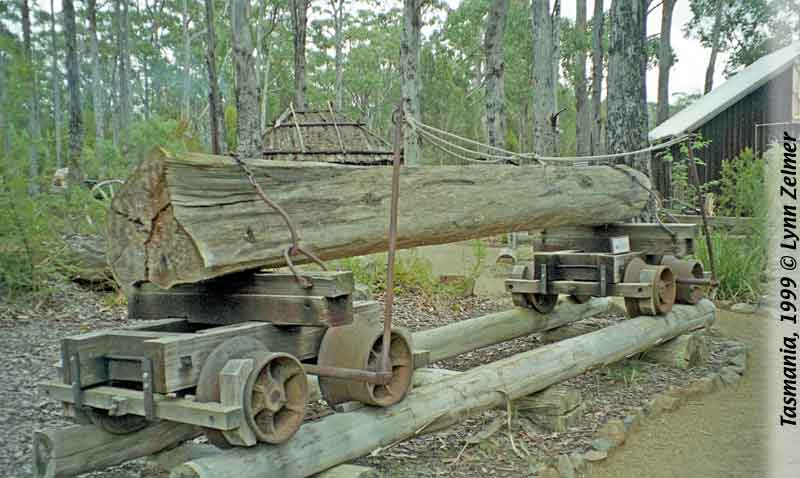 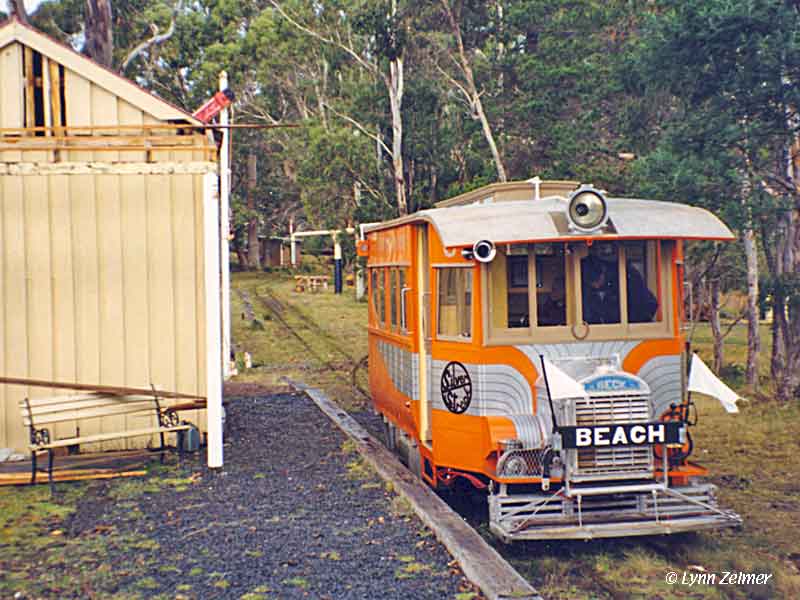 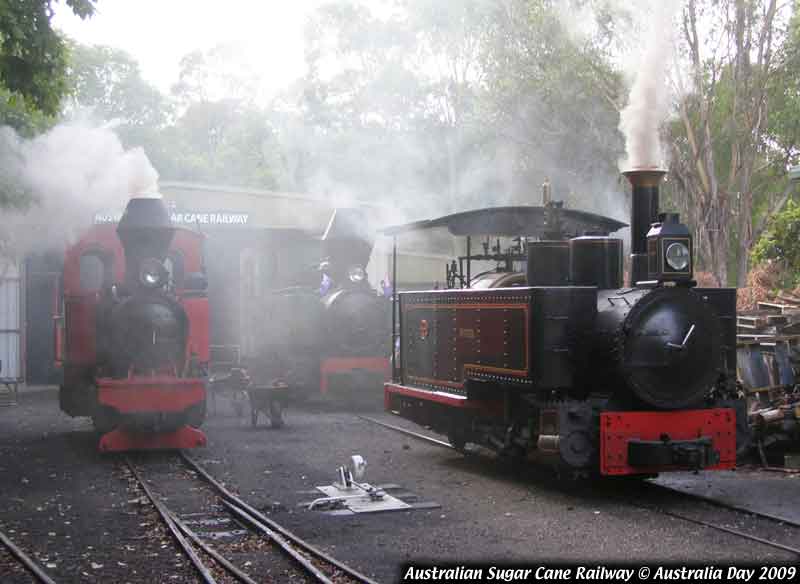 Australian Sugar Cane Railway: Situated in the Bundaberg Botanical Gardens the Bundaberg Steam Tramway Preservation Society operates a number of restored 2' gauge ex-sugar cane locomotives in a tourist railway environment. ASCR's strength is their relationship with local sugar mills and their proven restoration record. For photos use ASCR as the search term in the Image Collection. 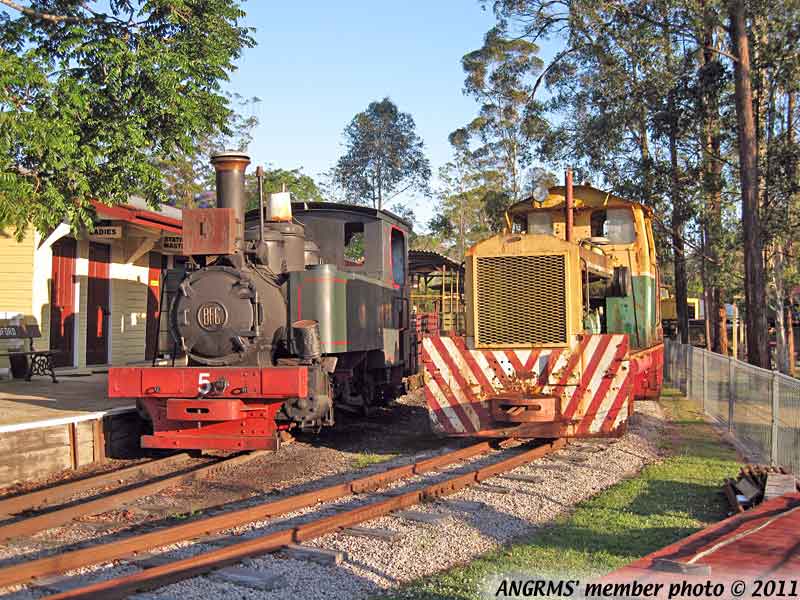 The Woodford Railway is a 2' gauge tourist railway operating on an ex-QR branch line formation using primarily ex-sugar cane equipment. Their historic and sales displays can also be found at Brisbane and area train shows. For photos use ANGRMS (Australian Narrow Gauge Railway Museum Society) as the search term in the Image Collection.

The Archer Park Rail Museum is a municipally owned but community run ex-QR station museum. One of a large number of station museums in Australia, it's major attraction is the only restored Purrey steam tram (3' 6" gauge) in the world. Similar trams ran on QR to service Rockhampton area communities. For photos use [AP (note square bracket!) as the search term in the Image Collection. 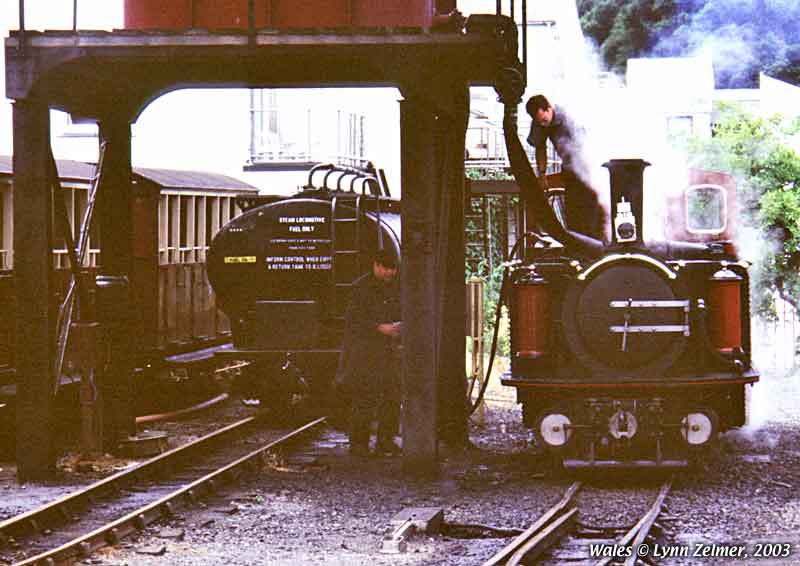 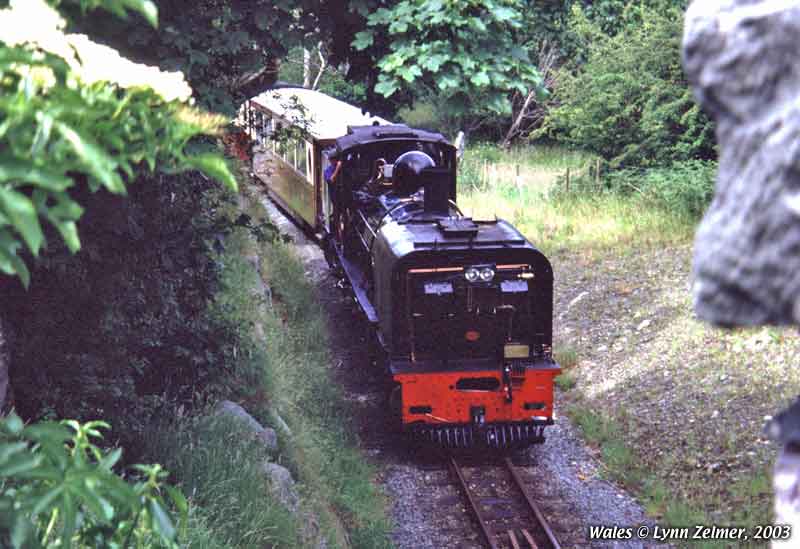 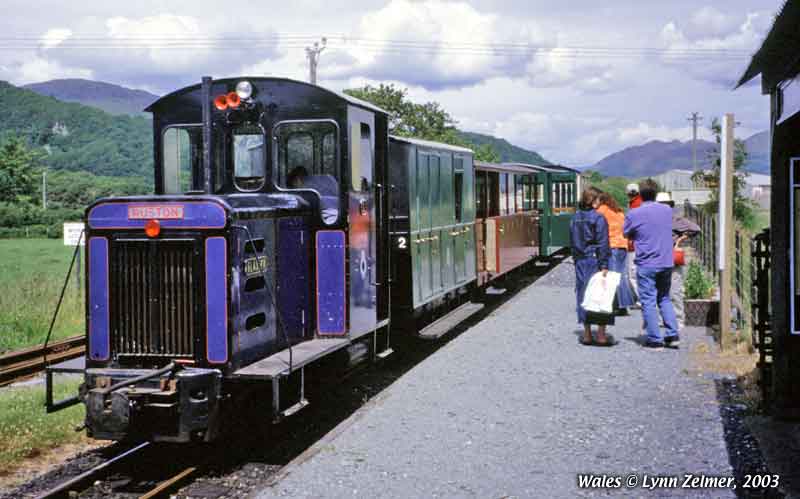 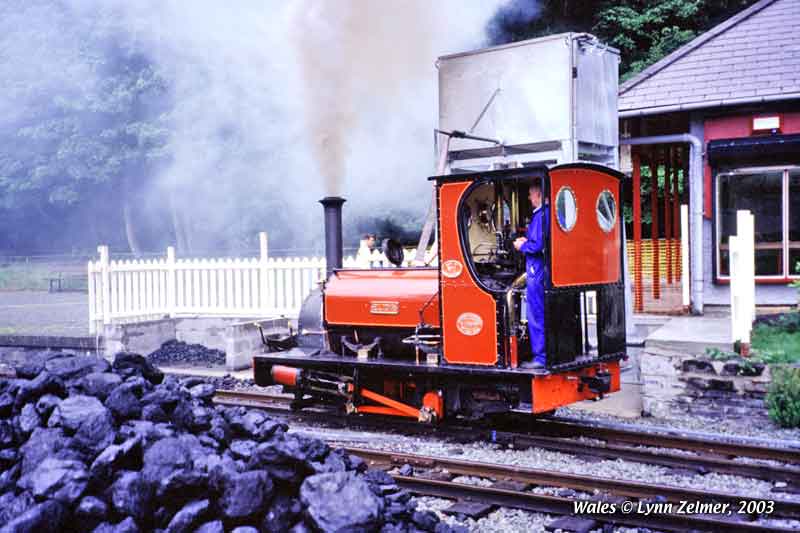 The Llanberis Lake Railway is a 1 ft 11 1/2" (597 mm) heritage railway running along the northern shore of Llyn Padarn (Snowdonia National Park) to what was once the second largest slate quarry in the world. Photos: 1 - 2 - 3. 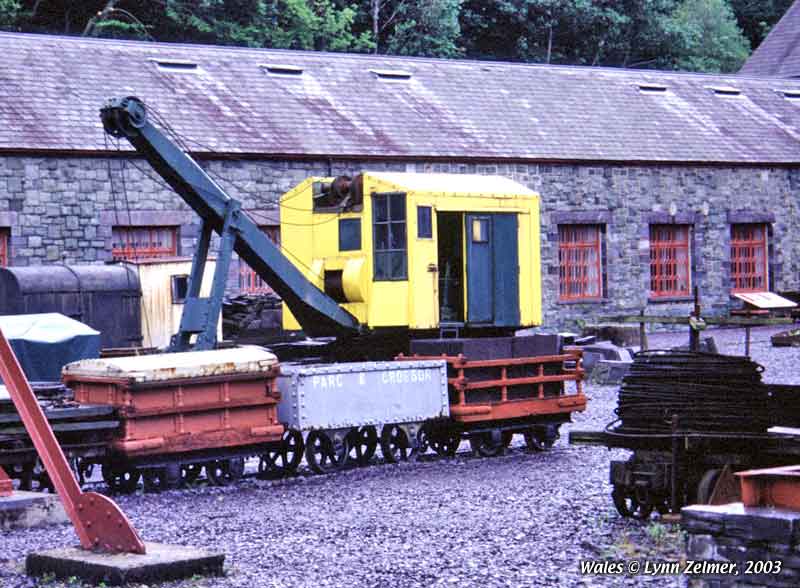 The Dinorwic Quarry is a large former slate quarry, now home to the Welsh National Slate Museum, located between the villages of Llanberis and Dinorwig in North Wales. Although a nominal "2-foot gauge", the actual gauge between the rails at Dinorwic was 1 ft 10 3⁄4" (578 mm) in common with its neighbour Penrhyn, but fractionally narrower than the public lines of the Ffestiniog Railway or North Wales Narrow Gauge Railway which were 1 ft 11 1⁄2" (597 mm). Photos 1 - 2 - 3.

Heeresfeldbahn locomotive during a photo run-past on the Sandstone Estates, South Africa 2010. This 2' gauge loco was built for the German Army in the Great War and later used on a Mozambique sugar estate.John Browning photographer. 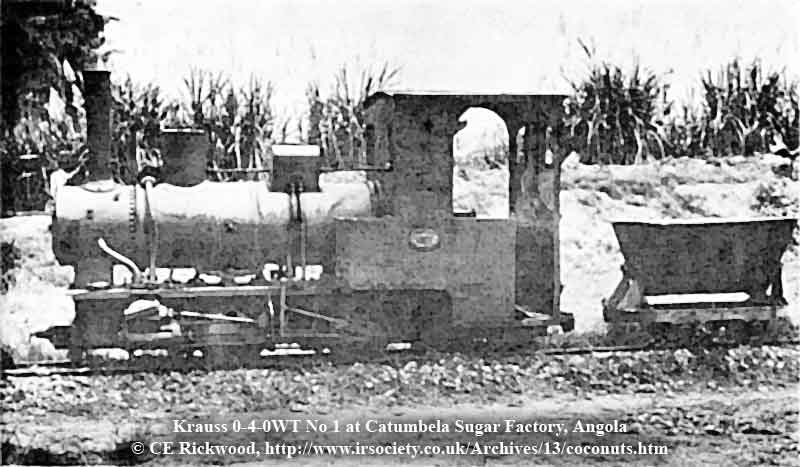 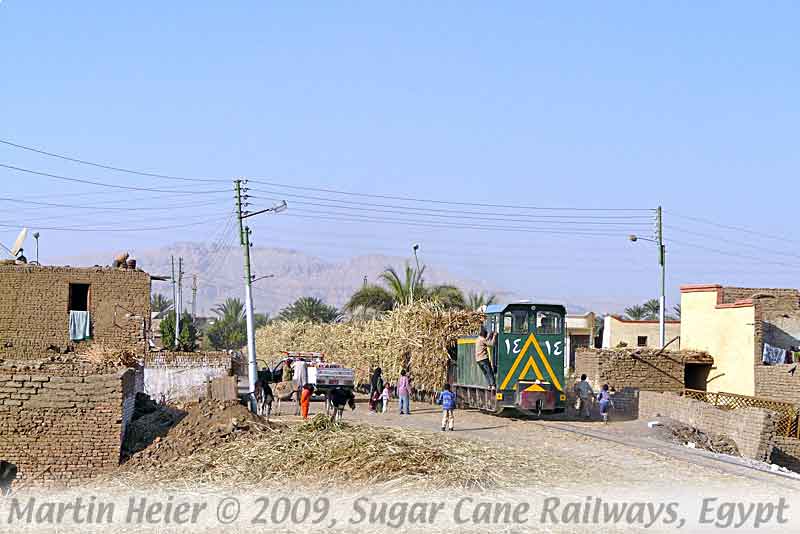 I lived and worked in India for almost two years when at least some steam was operating and took several memorable train trips, however almost no photographs. Some regrets, but that's life. However I did record my visit to the Rail Transport Museum, New Delhi, in 1979. The photo of the Museum below was taken in 1981. 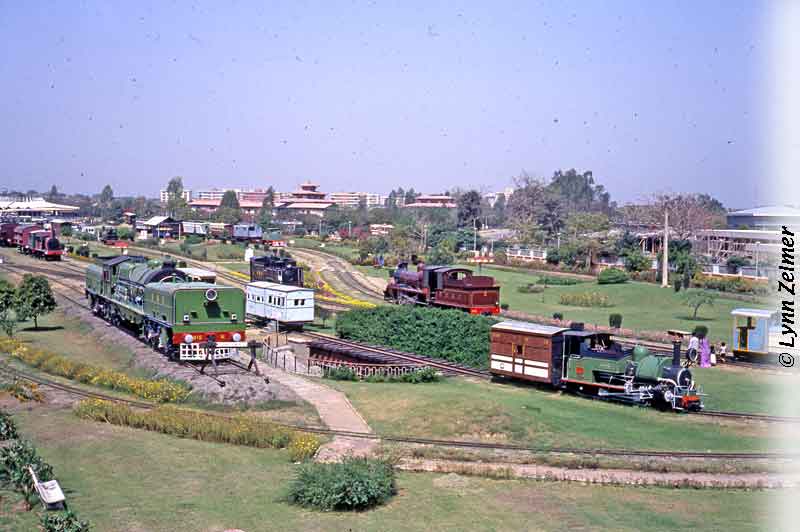 Note: Many links on this page are to Wikipedia in an attempt to provide current details while minimising the probability of lost links. Where institutions still exist a link to their web page can be found on the Wikipedia page.